We’ll see you in Hutchinson! 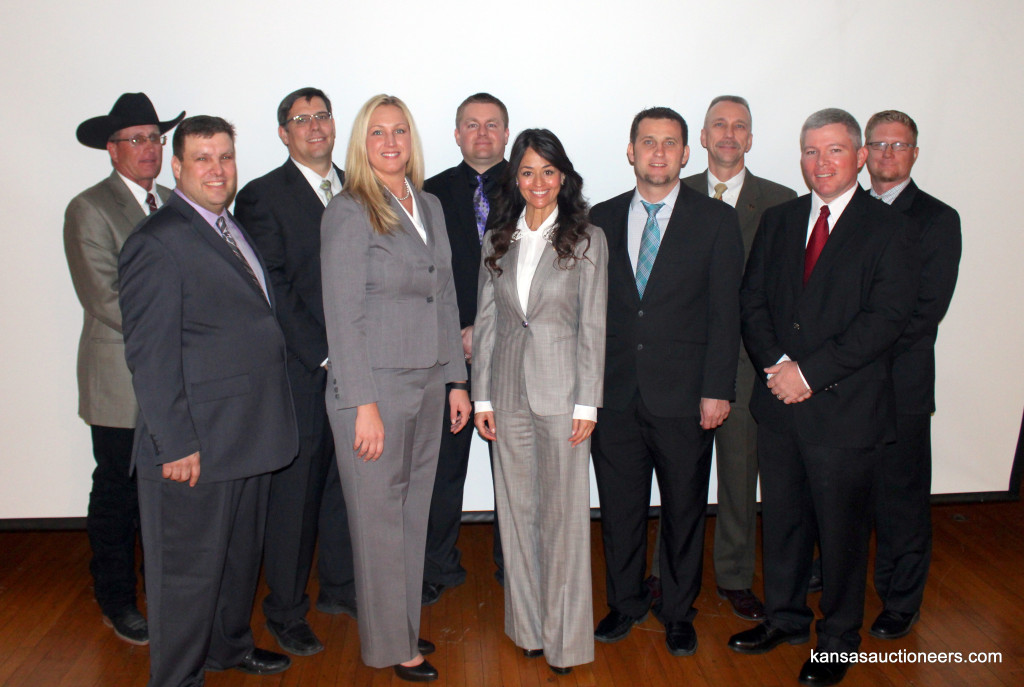 KAA room rate is $90 per night

We held our 8th Annual Kansas Livestock Auctioneer Championship on October 29th at Russell Livestock, LLC in Russell, Kansas. Contestants have to not only be members of the Kansas Auctioneers Association, but also be sponsored by a Kansas livestock market.

Gayle Ruggles of McCook, Nebraska, Justin Murphy of Russel, Iowa and Ronnie Reynolds of Yates Center, Kansas, had the honor of judging this years 11 competitors. They scored the contestants on presentation, clarity of chant/voice quality, bid catching, execution of sale and the question, “Would you hire this auctioneer?” Our 2015 Kansas Livestock Auctioneer Champion, Russele Sleep, was the master of ceremonies for this highly competitive event with so many highly talented auctioneers.

We are proud to announce Kyle Layman of Morland, KS as our 2016 Livestock Auctioneer Champion. Rounding out the top 5 are Brandon Hamel of Damar, KS; Dan McVey of Springfield, CO; Neil Bouray of Superior, NE and Cody Murray of Sylvan Grove, KS.

Listen to a radio interview KRSL and our very own Mike Bailey and Russele Sleepe, along with Craig Hienen of Russell Livestock, LLC on the morning of the contest.

Free hamburger lunch is being provided by Russell Livestock, LLC.

September 16th at the Bretz Law Arena on the Kansas State Fair grounds, finals for the title of 2015 Kansas Auctioneer Champion were held.

The distinguished judges who had the honor of adjudicating the fierce competition were Jason Winter, owner of West Central Auction Company in Harrisonville, Missouri; Regina Andrijeski, Co-Owner of Old West Realty & Auction in Curtis, Nebraka; and Troy Lippard, President of Lippard Auction in Enid, Oklahoma. They scored the contestants on presentation, chant/voice and effective auctioneering from the selling of three items. Scoring was also conducted on an interview with two questions being posed.

The field was narrowed down from eighteen at the KAA Winter Convention in January at the Drury Plaza Hotel in Wichita to top ten who competed in the finals:  Justin Ball of Chandler, OK; Justin Banzhaf of Cambridge, NE, Michael Burkhart of Greensburg, KS; Ross Daniels of Homboldt, KS; Shaun Elmore of Hoisington, KS; Jeff Garber of Lincoln, MO; Lenny Mullin of Shawnee, KS; Yve Rojas of Kansas City, MO; Donnie Stumpff of Cassville, MO; and Titus Yutzy of Hutchinson, KS. 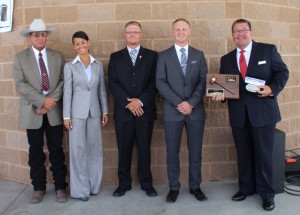 Congratulations and thank you to all our competitors for an amazing day of auctioning!

Lance Fullerton, 2014 Kansas Auctioneer Champion and MC of the 2015 finals.

The September/October issue of the KAA Sunflower newsletter is now available for members to view in the Member’s only section.

On April 29, the board of directors traveled to Topeka to meet with Governor Sam Brownback. The governor signed a proclamation declaring April to be Auctioneer’s Month. As always, it seems that auctioneers are one of his favorite groups to meet with.

As the governor tells it, his father thought he was quite the talker and would make a great auctioneer. He actually went to auction school, but in the end decided to go to law school.

The 2015 KAA Winter Convention featured excellent networking opportunities and auctioneer education in addition to the 2015 KAA Auctioneer Championship preliminary round.

It all started off on Thursday evening with the President’s Reception in a suite, KAA board meeting an the past president’s meeting with incoming president, Bill Eberhardt. Real estate continuing education courses were held Friday during the day with a required broker core course on office management by the Wichita Area Association of REALTORS® and an elective course called Auction Verdicts taught by Mike Brandly. The Auxiliary had their fun, touring and sampling the Nifty Nut House and doing some shopping.

We were excited to have 18 contestants in the 25th Annual Kansas Auctioneer Championship preliminaries. 10 finalists will be advancing to compete at the Kansas State Fair this fall.

The Rookie Competition and Fun Auction were held after dinner where funds were also raised for St. Jude Hospital. Please be proud as twice the amount was raised for them this year compared to 2014. Our Rookie Champion for 2015 is Cody Miller and our Early Bird winner is Mark Sudduth. Both won free registration to next year’s convention.

Saturday was power-packed with lots of educational sessions by Mike Brandly, Paul Behr and Christie King. The sessions included information on benefit auctions, UCCs, auctioneering, bid calling and the history of auctioneering, as well as a panel of champions session. The Auxiliary held their luncheon, conducted their scholarship fund auction and inducted Jean Oswalt into the KAA Auxiliary Hall of Fame.

Lessons from the panel of champions

At dinner, three scholarships were awarded – Brooke Eberhardt (Bill Eberhardt), Chelsea Fullerton (Lance Fullerton) and Afton Moore (granddaughter of Richard Schoen and LaDonna Schoen-Gehring). Two KAA New Auctioneer Scholarships were given out to Shaun Elmore and Marlon Hoeffner. Lance Fullerton received his 2014 Kansas Auctioneer Champion plaque and prize money and Russele Sleep, who was unable to attend, was recognized as the 2015 KAA Livestock Auctioneer Champion. The KAA Hall of Fame awards were presented to two recipients this year, Lester Edgecomb and Jack Newcom. After the director services auction to raise money for the association’s speaker fund, a dual reception was held for both of our new Hall of Fame inductees.

Sunday, after the inspirational worship service, Christie King filled in for Hannes Combest, who ended up not being able to make it this year, and presented Using Effective Communication to Increase Your Business. The installation luncheon was held where Richard Garvin received a belt buckle to commemorate his presidency in 2013. A plaque was given to Megan McCurdy Niedens in honor of her 2014 presidency. It was announced that Lenny Mullin and Yve Rojas are the newest members of the KAA’s board of directors. Both the KAA and KAA Auxiliary 2015 boards of directors were installed. Afterwards, both boards meet to already get started on their work for this year.

The latest iSeries educational seminar from the NAA features Krista Shuman, from Hall and Hall Auctions. She discusses the strategies they’ve used to win national marketing awards for their auction advertising.

Entry Form Join us for a fabulous weekend of l...

The preliminary round of the 2019 Kansas Auctione...
View all news